Since playing these instruments, I’ve become familiar with each instruments’ standard tuning and tuning variations.

If you want to learn about guitalele tunings, this is the post for you.

So what is standard tuning for the guitalele?

A guitalele is tuned to ADGCEa in the same intervals as a guitar but up a fourth as if you were to capo the guitar on the fifth fret.

The top four strings of the guitalele are tuned the same as a ukulele, GCEA, except the ukulele’s G string is tuned up an octave, just two steps down from the high A string.

Now that you know standard guitalele tuning, it’s just a matter of using a high-quality tuner to tune your instrument to that tuning.

You don’t need a tuner specifically for the guitalele.

In fact, anyone selling a “guitalele tuner” is just selling a standard stringed instrument tuner branded as a guitalele-specific tuner.

So the “guitalele tuner” I recommend is the same tuner I use for my guitar, banjitar, guitalele, and mando-guitar. I have a video of me playing a riff in standard tuning above!

Standard guitalele tuning will sound just like a classical guitar capoed on the fifth fret.

The ideal strings for a guitalele in standard tuning depend on whether your guitalele has bridge pins.

My guitalele (shown below) has bridge pins, and thus requires ball-end strings. However, many guitaleles don’t have bridge pins (like the extremely popular Yamaha guitalele).

Thus, they require standard nylon strings with loops on the end that secure them to the bridge.

Unfortunately, there aren’t many string options when it comes to guitaleles.

Thus, if your guitalele has bridge pins, I recommend these ball-end classical guitar strings. Although these are classical guitar strings, they work fine on the guitalele.

If your guitalele doesn’t have bridge pins, you can use these strings designed specifically for the guitalele. Also, check out my complete guide to guitalele strings for more information about my string recommendations.

And if you really want to take your guitalele knowledge to the next level, check out my guitalele chord chart poster: 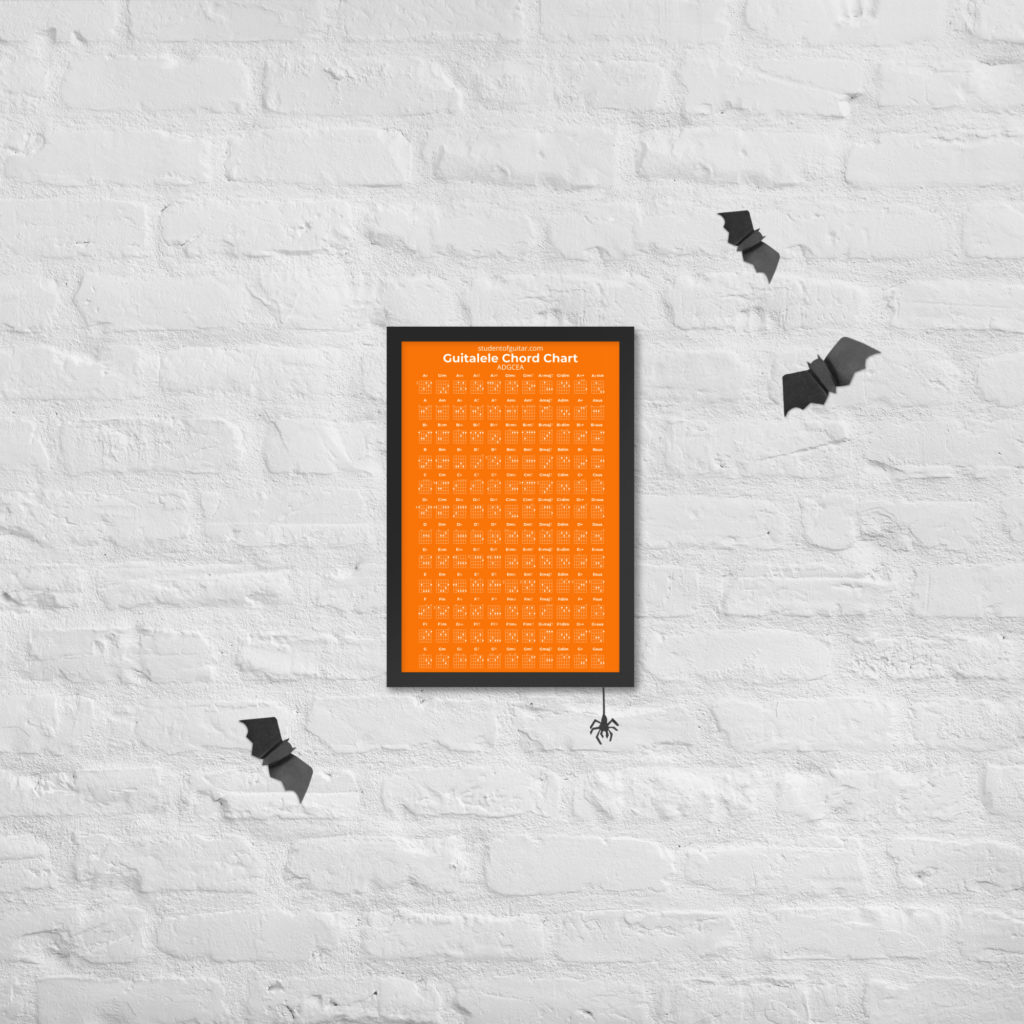 Alternatively, you may want to tune your guitalele more like a ukulele with the G string pitched up an octave.

This alternate tuning allows you to play ukulele songs when playing only the top four strings.

It also gives your instrument an interesting sound when playing all six strings.

It’s a fun and simple way to give your instrument a new sound.

If you’ve ever wondered if a guitalele can be tuned like a guitar, then this section is for you.

The answer is yes; you can absolutely tune a guitalele like a guitar: EADGBe.

However, note that it’s a non-standard tuning for the guitalele.

As a reminder, standard guitalele tuning is ADGCEa.

(This is the same as standard guitar tuning as if you were to capo on the fifth fret).

Aquila, one of the few string manufacturers that actually makes strings specifically for the guitalele, has strings for two alternate setups.

These tunings are standard guitar and high E tuning.

Guitaleles are great for this purpose because they’re actually smaller than many travel guitars, and are thus even more portable.

If you prefer the sound of a guitar tuned up an octave, try Aquila’s high E tuning string set.

This is the same tuning as a mando guitar and allows you to play in the same tonal range as higher-pitched instruments like the mandolin or mando guitar.

Again, check out my guide to guitalele strings for more detail on string recommendations for either of these tunings.

If you’re familiar with alternate tunings for the guitar, you’ve probably heard of DADGAD tuning.

There are a few ways to accomplish DADGAD tuning on a guitalele.

First, when tuning away from standard guitalele tuning, the equivalent of DADGAD tuning is actually GDGCDG.

This will give you that same DADGAD sound you would get on the guitar but as if you capoed on the 5th fret.

You can also tune your guitalele all the way down to DADGAD, just like you would on a standard guitar.

Finally, you can use a short-cut capo like this one from Keiser to capo only strings five, four, and three on the second fret of the guitalele.

This will give you an equivalent tuning of GDGCDG capoed on the 2nd fret or AEADEA.

I hope this guide helps you understand the various tunings for the guitalele.

Let me know in the comments if you have any further questions!

My name is Harrison and I created Student of Guitar to share everything I’m learning about guitar. Once I picked up the guitar, I knew it was the instrument for me and have played ever since. I hope this website helps you in your guitar journey!
All Posts
PrevPreviousThe Best Humbucker for a Strat HSS (2022 Edition)
Next14 Basic Guitalele Chords You Should Know (2022 Guide)Next

Want to take your guitalele chord knowledge to the next level?

GET A FRAMED POSTER OF ALL THE MOST IMPORTANT GUITALELE CHORDS